President & CEO Russ Cronin talks about the road that led him to Adirondack Regional—and what the next years are likely to bring.
Wed, 05/19/2021

Partners with you. Through thick and thin. 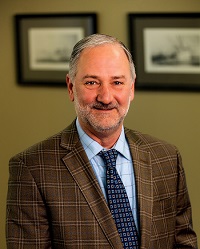 Russ Cronin remembers where he was when he realized he needed a different path in finance.

It was during the financial crisis of 2008. He was on the road from Cleveland, where he was working, and headed back to visit his parents in the Adirondacks. Lehman Brothers, the storied investment bank, was collapsing. By the time he got to Watertown, he had to pull over to process the damage: The entire financial system was at risk. And once he got to his parents’ house, his mother asked him: “What have you done to us?”

That’s when he knew: It was time for a change.

By that point in his career, he had worked for some of the country’s largest financial services companies. “There wasn’t a lot of personal touch,” he acknowledged. He wanted to work for an institution that could make a real difference in the lives of its customers by giving them the resources to get past their challenges, and take advantage of opportunities.

It took a while to make that leap. He moved to the Adirondacks in 2014, when he became the chief financial officer for St. Joseph’s, the addiction treatment center based in Saranac Lake. A few years after that, he became CFO of the Adirondack Foundation, the Lake Placid philanthropic organization.

Both jobs taught him a lot about the needs of the region’s communities, and, in particular, the struggles many people in Northern NY face. He credits Adirondack Foundation President and CEO Cali Brooks with showing him the impact that philanthropy can have in a small town—and, by extension, what it can mean to a person, or a family, when their local credit union helps them get past a rough patch.

Since arriving at Adirondack Regional Federal Credit Union in 2019, he’s proudest to have helped engineer a culture change in which the staff goes out of their way to solve customer problems. Answers that may have been “no” a few years ago—for a personal loan, a payment extension, a forgiven late fee—are now “yes.”

He’s worked on his own management style, too, he said. Over his first two years, Cronin said most of his professional development has been devoted to so-called “soft skills.”

A little empathy, he said, goes a long way. “My mantra is, ‘What would David do?’” he said, referring to his late partner, David Tomberlin—a local restaurant owner who’s deft personal touch complemented his own more analytic style.

The work, he said, has paid off. More than ever, Adirondack Regional members don’t hesitate to approach credit union staff for help when they need it.

“I think the credit union now is the community credit union that our board was looking to establish when they hired me,” he said.

That commitment to helping members get past financial stresses was especially timely over the past year, as COVID-19 upended lives.

“All in all, our communities have done pretty well,” Cronin said. In many ways, the North Country has been spared some of the pandemic’s most dire economic effects. But he’s processed enough PPP applications to understand that not everybody was unscathed. Many seasonal businesses that rely on summer tourism were hobbled and still haven’t recovered.

The Future of the Credit Union

Cronin said his goal for the coming years is to create a larger regional presence for the credit union. He wants to expand westward into St. Lawrence County, where many towns aren’t served by any banks at all. And he’d also like to push farther east toward the Champlain Valley, where he sees a need for more banks to support young families, many of whom have started working the region’s farms.

“I’m very optimistic we can continue building on the momentum that we’ve established,” he said.